SUSAN MILLAR DUMARS was born in Philadelphia. Her book of short stories, Lights in the Distance (Doire Press, 2010), followed the successful chapbook American Girls (Lapwing Press, 2007). She has been the recipient of an Irish Arts Council Bursary for her fiction and has also published three poetry collections with Salmon Poetry, the most recent, The God Thing in 2013. In winter 2014 she was a featured fiction writer on the website Atticus Review. Susan lives in Galway, where she and her husband Kevin Higgins have coordinated the Over the Edge reading series since 2003. She is the editor of the 2013 anthology Over the Edge: The First Ten Years.

A collection of sharp and closely considered stories which crackle with anxious energy.

AFTER THE SEX Peg asked Vin to tune in her VCR. She’d heard you get better reception that way. Vin rolled down his window and lit a Marlboro. ‘You should get cable.’
‘Can’t afford it,’ said Peg, peeling her rear end off the seat to pull her skirt down. ‘Couldn’t afford the VCR  but Lorene’s ex made us a deal.’
‘He do car stereos too?’
‘Sure. I’ll give you his card. What about my VCR?’
‘Nothing to it. You want me to go in the house now and do it for you?’
‘Better wait till after Labor Day. Mary Denise will be back up at school.’
‘Honey,’ asked Vin as he squeezed Peg’s knee, ‘how come your daughter doesn’t like me?’
‘Aww. Don’t take it to heart. Mary Denise doesn’t  like anybody.’
They were quiet for a while, listening to the car radio. Woven through shards of static was Donna Summer purring ‘I Feel
Love’. Vin fiddled with the dial but couldn’t get the station in any clearer. ‘Damn thing,’ he grunted. He tossed his cigarette out the window and let his balding head drop against the seat. Soon he was asleep.
He looks like a baby, Peg thought with a quiver of fondness. Like a helpless baby with grey nose hair. It was easy to care about him this way, his trousers at his ankles, his shirt unbuttoned to reveal flesh purple-white as a turnip. She ran a flat hand down his chest and belly, the same way she’d smooth a favourite tablecloth. Then she found her bag and started rooting for her lipstick.
The song disintegrated into a sh-h-h. She rolled her window all the way down, closed her eyes and leaned her head out. It was finally dark. The air was almost cool and almost fresh. She pretended the car was in motion, the wind moving through her curls as she and Vin motored toward a city of coloured lights in the distance. She didn’t care if they ever got there. It was the travelling, the road, the being nowhere with everything to look forward to. She puckered her lips and tried to take a big sip of night. If only Vin would wake up and drive them somewhere. Even downtown. Or wake up and just talk to her. She opened her eyes and the street lights on Ringold Street were burning orange, turning everything yellow-brown, like an old photo. Everything was still; it could have been a photo. The radio hissed.
At least in the car she could sort of pretend they were teenagers again; smell of leather, dashboard starlight, sudden cold of a seatbelt buckle under her rear end. There was something fumbly-clean-breakfast-cereal-American about it. Especially as the car was a sedan. Not one of these Japanese tin cans, but a baby-blue four-door Chevy Impala with white interior, first owned by Vin’s Uncle Aldo. Got lousy mileage, a bitch to park, and the radio was crummy.  But God, what a beauty!  Like the cheeseburgers in that diner they liked on 21st Street. Fat, drippy cheeseburgers you had to hold in two hands, with pickle slices and the little cup of coleslaw on the plate. Cheeseburger Deluxe, they called it. De-luxe. Peg tried the word out, whispering to herself. It had a square-cut sound. It sparkled.

Interview in The Short Review

Lights In The Distance 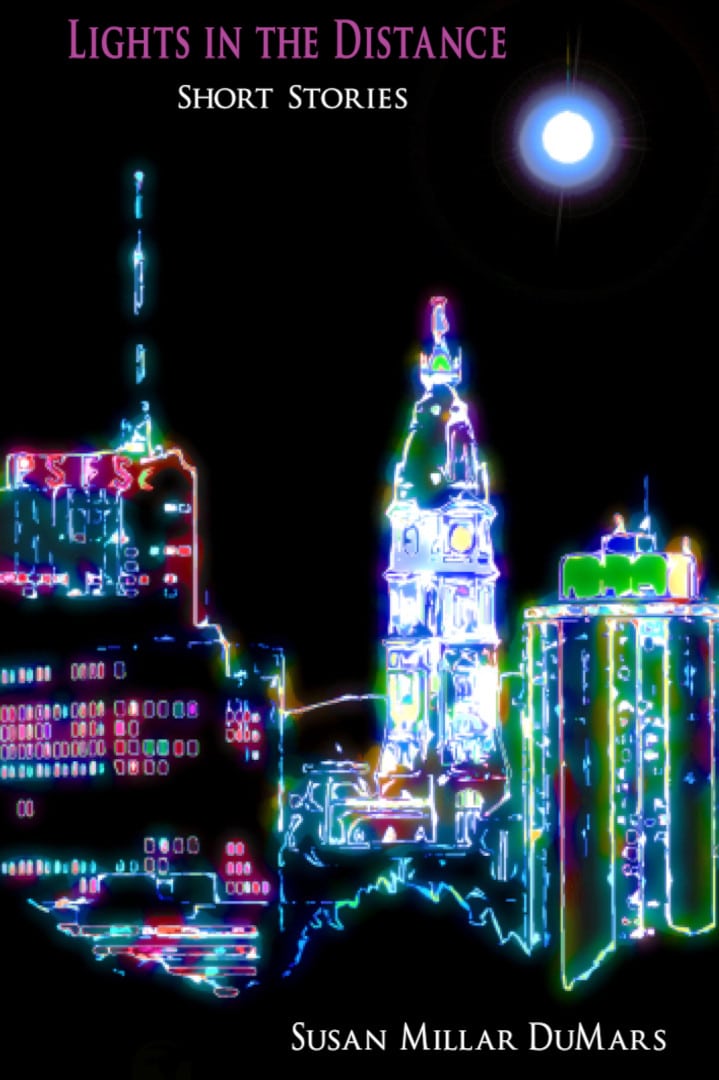 It is what every serious writer sets out to do — to give voice to characters that do not have one. Susan writes in a very considered way about characters that are not in control of their own destinies but are in fact being shaped by events around them. The most striking feature of these stories is that Susan comes to them with the eye and craft of a poet. This is obvious in the rhythm of the lines, their length, and in the deftly-chosen language (Geraldine Mills).