WILLIAM WALL is the author of four novels, including This is the Country (Sceptre), longlisted for the Man Booker Prize; four collections of poetry; and three volumes of short stories. He was the first European winner of the Drue Heinz Prize for Literature in the USA. He has won many other prizes and awards including: the Premio Lerici Pea and Premio Città di Conza in Italy; the Virginia Faulkner Award in the USA; The Doolin Prize for poetry, The Sean O’Faoláin Prize for short fiction, several Writer’s Week prizes and The Patrick Kavanagh Award in Ireland. He was shortlisted for the Young Minds Book Award, the Irish Book Awards, the Raymond Carver Award, the Hennessy Award and numerous others. His work has been translated into many languages and he translates from Italian. He was a 2009 Fellow of The Liguria Centre for the Arts & Humanities. He holds a PhD in Creative writing from UCC and is Cork’s first poet laureate. He lives in Cork. You can see more readings from William through his YouTube page here.

Wall is such a writer — lyrical and cruel and bold and with metaphors to die for.

An Extract From ‘I Bought a Heart’

I bought a heart. It was a sheep’s heart. I intended to stuff it with bread, onion and thyme. It was raining outside but the market was covered. My jaw was killing me. It hurts more on wet days. The butcher was watching television. There was a small screen set on the wall to the left of the counter. Look at the fuckers, he said. Jimmy, I said, you shouldn’t say fuckers to customers. Sure you’re hardly a customer at all, he said, all you buy is fucking hearts, Jesus, if I was depending on you for a living. He pointed at the television. Look at the bastards, after screwing us for ten years and now we’re supposed to feel sorry for them. The sound was turned down. Do you know what I heard this morning? he said. Did you ever hear the expression stockbroker sentiment? Sentiment my arse. Put me down for two hearts next Thursday, I said, I’m expecting company. He wrote it in his book. Then I went away. I did not have an umbrella. I walked as near to the wall as I could because it’s drier there. There are awnings overhead from time to time. I thought about a quick pint but realised I didn’t have the money. The heart broke me. My mother is coming out for the day on Thursday and she still likes hearts. This is something I don’t understand. She doesn’t know my name. She doesn’t recognise me. She doesn’t remember that she has a child. But she still likes the taste of meat. She even remembers that she likes the taste. I sometimes think that the stomach has its own brain. When the rain got lighter I made a run for it. The pain in my jaw stopped when I ran. That’s a good one, I thought, if I could keep running I’d never get pain any more. But you can’t. Running would kill you quick enough.

Crossing the bridge the heavens opened. It was that straight down rain. It came down under my collar and through my clothes. I stood into the doorway of the funeral home. The rain made the river smooth. Then it stopped and in a minute the sun came out. That was when I noticed that she was behind me. She was crying. Are you all right, I said. Look, I said, I have a heart. She just looked at me. I’m going to stuff the fucker, I said. I don’t know why I said fucker. I suppose that was Jimmy coming out in me. Jimmy is a big influence. Even when we were kids my mother used to say you were out with that Jimmy Canty again, the tongue he has, I can hear him in you. The woman came forward. What kind of a heart, she said. Sheep, I said. I’m going to stuff it. Lovely, she said, do you cook yourself? I do. Good man, she said, I’m all for that. I said, Did someone die on you? My husband, she said. I’m sorry. No, we were estranged, I haven’t seen him in a while, he’s in there now, I just thought I’d nip in before the new family arrives and say goodbye, funny thing is I never cried when I said goodbye before, I suppose I’m sentimental. Is he open for viewing? I said. I don’t know, she said, I didn’t go in yet. I’m just sheltering from the rain. So I see, she said. What did he die of? A stroke, at his age, you wouldn’t expect that, would you, except he was a workaholic of course, that can’t be good for you, he had no life. I said I could go in and have a look at the corpse with her. She looked at me without saying anything for a bit during which time it started to rain again. Then she said, Would you? I said I would. We went in and had a look. We had to ask someone in the office because there were three corpses in three different rooms. He was lying in a nice-looking coffin with silk lining and what I thought were probably gold-plated handles. He was stone dead and he looked it. I saw the way my father looked. People said he looked beautiful because all the lines in his face were gone but I preferred him with the lines. They said death took forty years off him. That was no good to me because death took everything from me. We ticked gold-plated handles on the menu the undertaker gave us. We ticked hardwood. We ticked marble headstone. We gave him everything but when he was in a hole in the ground, nothing made any difference. He was just gone. Everybody said it was a great send-off. That didn’t make any difference either. I said that to the woman and she said it didn’t matter to her because the new family were paying for it, she wasn’t even notified except a friend saw it in the deaths. She started crying again. That was the way he looked, she said, he was a handsome chap, he was gorgeous really. Then she spat in his face. She did it twice. Missus, I said, what are you doing, you can’t do that. That’s for everything he did to me, she said. Then she said to the corpse, How do you like it now you fucking dead bastard, much good your fucking fancy woman did you. Come on, she said, I need a drink.

Sample Poems from Smugglers in the Underground Hug Trade: A Journal of the Plague Year

Review of Hearing Voices, Seeing Things in The Irish Times, 2016

William Wall interview on 'seeing the story in The Irish Times, 2016

Article about William Wall in The Irish Times, 2021

Interview in The Irish Examiner, 2021

Smugglers in the Underground Hug Trade: A Journal of the Plague Year Surprised by how few literary references exist for the Spanish ‘Flu pandemic of 1918/19, William Wall made a conscious decision to document the experience of ‘the strangest year we have lived’.  In a poetic journal, Wall captures the roller-coaster of emotions from the first terrible days in Italy to the highs and lows of the lockdown in Ireland, culminating in the frightening increase in numbers at Christmas 2020.

But this is not just a book about the plague: the author turns to nature, to love, to his beloved Cork coast and sea-swimming for solace. There are many tender memories, moments of personal inspiration, humour and hopefulness—the whole suffused with an acute awareness of the historical context. There have been other plagues and pandemics, the poems say, and we have survived: we will survive this too. 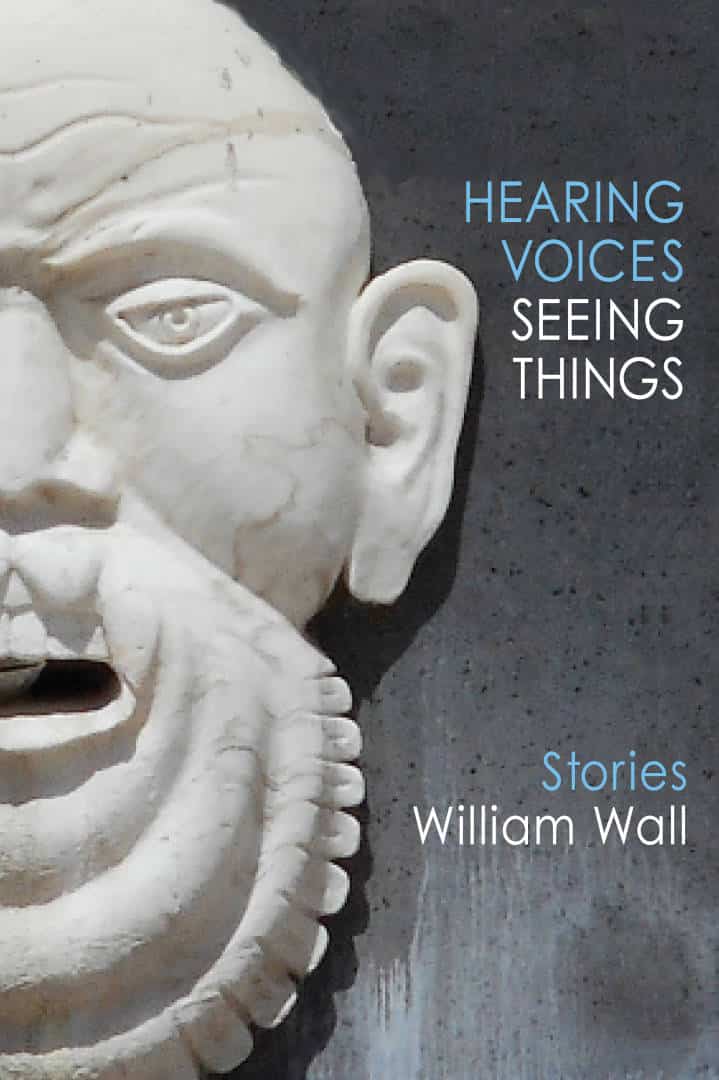 The stories in Hearing Voices, Seeing Things are inspired by overheard conversations, chance phrases, isolated encounters and each story is a brief, intense, confessional moment in a character’s life. The stories are told directly by the characters to the reader and require the reader to adjust to the character’s speech patterns and way of thinking. This creates an intimacy and, in some cases, complicity between reader and speaker. These are stories of ordinary people coping with an extraordinary world, a little lost and uncertain of their future.